THE NEW REVELATION OF JESUS CHRIST 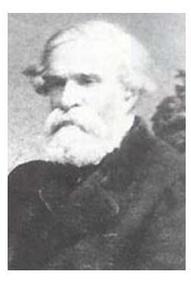 Gottfried Mayerhofer was born in Munich in 1807 as the descendant of a notable german family. When Prince Otto of Bavaria became King of Greece, Mayerhofer went with him as an officer of the Greek royal service. In 1837 he married in Athens the daughter of a wholesale merchant and later lived in Trieste in good circumstances. There he encountered the writings of the New Revelation through Jakob Lorber and became an enthusiastic follower of the Lord´s  teachings. He helped financially the publisher Johannes Busch in the publication of "The Great Gospel of John" and other Lorber works.

In 1870, at an advanced age, Gottfried Mayerhofer himself, received the gift of hearing the Inner Word and accomplished this noble task for the Lord, as Lorber did also, until the last year of his life (1877) Having often worked at night, Mayerhofer developed a cataract and had to undergo eye surgery. Afterwards, he chose to dictate the words the inner voice gave him to a close friend. Thus, through his efforts, several works originated, in which many revelations relating to creation, to life, to the road to salvation, to communication with the spiritual world, and many other fundamental questions of life were presented.
The best known books that Lord offered to humanity through Gottfried Mayerhofer are The Lord´s Sermons, a wonderful book full of deep moral lessons and teachings concerning Lord's First and Second Coming, Secrets of Creation and Secrets of life, a comprehensive system of spiritual revelations, which explain the most important aspects of human and natural existence. All the works made through Gottfried Mayerhofer (see the list of Mayerhofer's writings ) are totally compatible with those made through Lorber, they always sustain and complete each other. In Mayerhofer's works can also be found accurate references to later scientific discoveries. That's why Mayerhofer's works are considered, next to Lorber's, The NEW REVELATION of JESUS CHRIST , the greatest spiritual food intended to prepare humanity for the Lord's Second Coming. Some hints concerning the probable identity of Mayerhofer as one of the two witnesses of God mentioned in Revelation 11 can be found in the study THE STRONG LINK BETWEEN THE BIBLE AND THE NEW REVELATION - THE TWO WITNESSES

SUPPORTING EXCERPTS FROM THE NR
"As often as anyone did something that was not exactly according to spiritual laws, the soul felt a disquieting presentiment or it perceived well a voice in itself which made to it serious reproaches, and which it knew generally under the title ‘conscience', because it is not to be denied and, according to its name, it arises as something conscious (certain).   See now, this voice, which often tells a person things which he does not like to hear, this voice is partly the voice of your spirit, partly that of the voice of the good spirit or angel who accompanies you, but where you, besides also often can perceive voices which want to lead you into evil;  these voices are then the voices of self-love or the voice of an evil spirit. Finally, there is still another voice, which often gives to you gentle words of warning, patient remonstrations, when you intend to do something which your conscience has already preached against beforehand.   Now see, this voice which, with so much patience goes after you with its teachings, this voice is often Mine!   Here announces itself My whispering in your heart!   The head with its thinking is silent, and you feel or hear this voice slowly and quietly explaining all that is for and against of a beginning action.
Whoever begins to give himself to this voice, to give heed to it and to act according to that which it heard, he will, bit by bit, be led from the outer into the inner life, which will prepare for him pleasures, whereby he will easily be able to get over the outer world!   In this manner the soul waxes stronger and stronger, and it is made easier for the spirit in the center, to impress upon the soul its spiritual type more and more.
When it is the case that the thus heightened soul-life has reached a certain level, and if I need a person who shall proclaim My Word pure, as I give it, I thus use such an already soon-to-be-prepared soul, in order to achieve My purpose.
During My inflowing and the perception of My voice, it is for the scribe as if he spoke with a second person which, in the beginning, asks only the scribe but then continues without interruption to relate and to speak.   All other ideas step back, all fantasy images disappear, the person is only an ear, and certainly a spiritual ear;  for the noise that strikes his earthly ear from outside, does not concern him.   He is concentrating to hear My voice alone, lives a common life with Me and passes on word-perfect that which I want to say to you, so that you advance in clarity and betterment."
(Triunity, pp. 54-55)